Whistler Blackcomb has risen through the ranks to become one of the top candidates for the title of “World’s Greatest Ski Resort.” Whistler is a true skiers’ paradise, with excellent skiing, one of the world’s best high-speed lift systems, and a diverse range of après-ski options and extensive facilities. Its 8,171-acre ski area happens to be one of the world’s best, attracting skiers of all abilities with high-altitude powder bowls and heart-pumping couloirs as well as more gentle tree-lined slopes down to the resort.

Après ski
Suppose you’re craving exquisite sushi, warm Belgian waffles, or superb steaks. In that case, the resort’s cuisine is inspired by a truly unique blend of global influences, and the vibrant, varied après-ski choices are sure to keep you entertained after a day on the slopes! It’s no surprise that Whistler is consistently voted “Best North American Ski Resort” by North Americans and is Japan’s favourite international ski destination. Canada has some of the best ski resorts in the world.

Winter Olympics
Whistler was founded on the dream of hosting the Winter Olympics in British Columbia. In 1968, a group of Vancouver businessmen submitted an offer to be Canada’s nominee for the Winter Olympics, choosing Whistler Mountain as their venue. Despite being unsuccessful in this proposal, work on the new ski area began in earnest in 2003. This was when the bid to host the 2010 Olympic and Paralympic Games was successful.

Big White ski resort
Big White, British Columbia’s highest (and second-largest) resort, is nicknamed the “Friendly Giant” by locals. Despite being somewhat overshadowed in terms of size and international popularity by its famous neighbour Whistler, Big White has quietly grown in size and renown, attracting discerning skiers and snowboarders from all over the world. Its dual-track strategy of providing the highest quality amenities while also providing a cult-like terrain mix is reminiscent of Crested Butte, Colorado, located near Aspen.

Abundant snow
The plentiful powder snowfall, which averages more than 7.5 metres (24 feet) annually, is a significant natural advantage. Since this snow is said to fall daily during the season, rather than in large one-off dumps, the two-thirds of patrolled terrain left ungroomed has fresh powder more often than others. Even though only about a quarter of the landscape is rated advanced, this aspect contributes to Big White’s prestige among advanced skiers and snowboarders. Snow ghosts, a popular feature in Japanese resorts but less well known elsewhere globally, are also a product of heavy snowfalls.

Sun Peaks ski resort
Sun Peaks has risen quickly in the last ten years to become one of Canada’s and the world’s most popular ski resorts. This is now Canada’s third-largest ski resort, with over 4,000 acres of slopes. The resort’s reputation has been founded on a combination of the first-class service, state-of-the-art facilities at the base of the mountain, and excellent skiing across a vast ski area, encompassing three mountains. Blessed with an average of 6 metres (220 inches) of light dry powder in an average winter and somehow fitting in 2000 hours of sunshine annually. The resort is relatively new, and all of the accommodation is slopeside as well.

Investment in the area
Lift and trail construction on Sun Peaks third mountain (Mt. Morrissey) has resulted in over 500 acres of skiable terrain, taking the total skiable terrain to about 4,270 acres, second only to Whistler in British Columbia. The ongoing investment is part of a master plan that includes five skiable mountains, a full-service resort village, and cutting-edge resort technology, as well as a diverse list of four-season leisure, educational, and entertainment facilities.
When Sun Peaks first opened in 1961, it was known as Tod Mountain. Nippon Cable bought the resort in 1992 and renamed it as part of a larger resort development strategy. Tod Mountain is still the most popular ski resort. 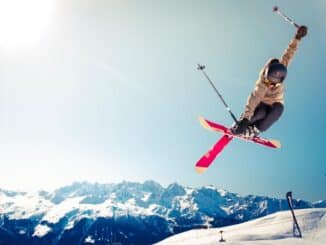 What Are The Most Difficult Ski Runs In The World?

First Time Skiing In France – The Best Resort Is Les Gets